Why Should I Clear Snow off My Roof? 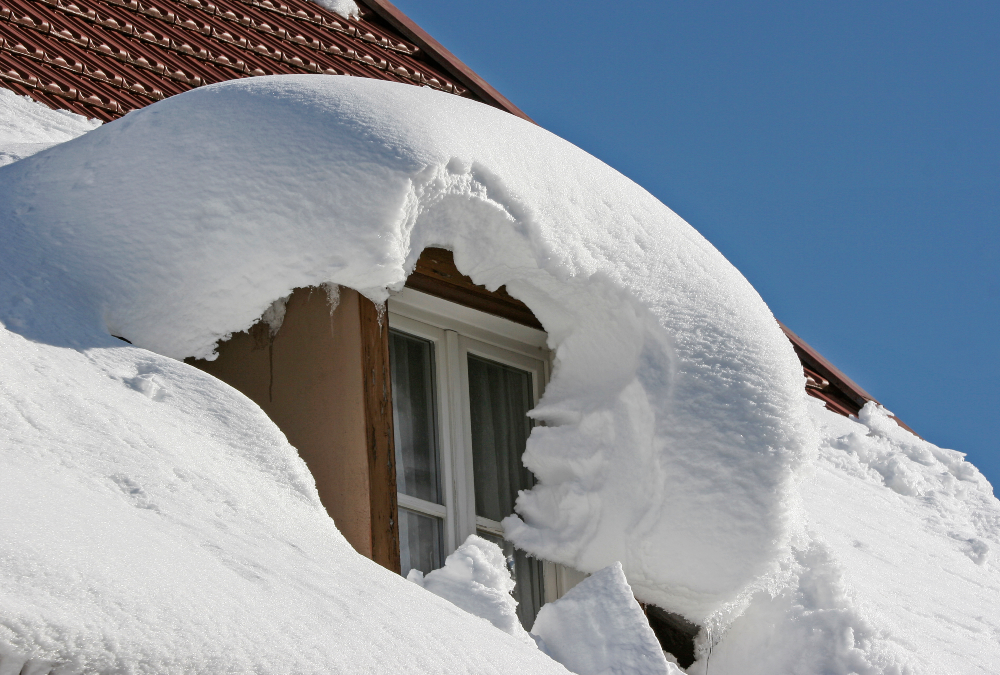 If you’ve ever lived in an apartment, you probably miss how convenient your life used to be. Whenever something in your apartment broke, all you had to do was inform the landlord and then hope he would get around to fixing it before the next papal election.

Now that you are a homeowner, you have far more responsibilities. Not the least among these is clearing snow off your roof. Although they are uncommon, injuries are occasionally caused by snow and ice falling off of roofs. But when it is allowed to accumulate on a roof, snow presents a greater risk of causing property damage – and it has two different ways of doing so.

The average snowflake weighs approximately 7/100,000 ounces. That is not very heavy. We bet you could lift a few hundred snowflakes without breaking a sweat. But snowflakes are formidable in great numbers! One cubic foot of snow weighs about 20 pounds, and it is even heavier when the snow is wet and densely packed.

An average home’s roof supports about 10 tons when it is buried beneath a foot of snow. Most roofs can safely bear two feet of fluffy snow, but any roof is bound to give out when it is placed under enough stress. A roof may accumulate even more snow if it has a pitch of 3/12 or less, is made of shingles, or possesses one or more valleys. If your roof was already sagging, leaking, or showing any other signs of disrepair before the arrival of winter, it’s only at greater risk of collapsing under the immense weight of snowfall.

An ice dam is a ridge of ice that forms on the side of a roof under two conditions: snow has accumulated on the roof, and the surface of the roof isn’t a uniform temperature. Specifically, the surface above the ice dam is above freezing, whereas the surface beneath it is below freezing.

When snowmelt encounters an ice dam, it remains on the roof instead of flowing freely off it. Water will not sit tight on the roof, however. It will follow the path of least resistance, and accordingly seep through the roof’s cracks and crevices.

If water reaches insulation, it will saturate it until it is no longer effective at retaining heat. And if it reaches the beams and rafters, it can weaken the house’s entire frame. Water reaching the walls and ceiling will cause their paint to blister. If an ice dam still allows some water to steadily trickle off the roof, it can produce icicles that are large enough to rip off gutters and destroy fascia. Worse yet, water infiltration can create optimal breeding conditions for black mold – a fungus that looks disgusting, causes illness, destroys drywall, and may even force a wall or ceiling to collapse.

All of this is to say that you really don’t want an ice dam on your roof.

An ice dam can form when the roof and attic aren’t adequately insulated and ventilated. Alternatively, it may result when a light fixture, HVAC duct, vent or chimney heats the roof unevenly. Repairing a house until its roof is no longer capable of producing an ice dam is an involved process that entails adding insulation and ventilation. The goal of this project is to keep the entire roof at freezing temperatures all winter long.

There is a more economical approach to preventing ice dams, however. It is the same method used to prevent snow from exerting excessive pressure against your roof. All you have to do is clear snow off of your roof!

How to Clear Snow Off Your Roof

We’d like to begin by advising against a couple of methods for clearing snow off a roof which are popular but shouldn’t be. Some homeowners throw rock salt on their roofs. This method is arguably appropriate for emergency ice dam removal, but it also exposes the roof to a corrosive substance that will destroy shingles, siding and gutters (not to mention kill any plants that are surrounding the home). Heat cables are also frequently used, but they are ugly, expensive to operate, capable of starting fires, and frequently ineffective at their only job.

The best way to remove snow from the roof is also the simplest: the roof rake. Raking snow off the roof is taxing, but no alternative is more cost-effective. Take care to use a roof rake with a plastic head, as it is too soft to do permanent damage to shingles. You also want to leave about 1″ of snow on the roof, as that will protect the underlying shingles and waterproofing membrane. If you can, try to leave grooves in the snow covering the bottommost layer of the roof. Doing so will help prevent pooling by letting water drain freely off the roof.

If raking your roof sounds like work you would rather avoid, then we welcome you to contact Angell’s Construction today! We won’t rake your roof for you. We will do something even better: repair it so it is no longer vulnerable to ice dams, and also strong enough to support the weight of heavy snow fall. In addition to building, remodeling and hail damage restoration, we specialize in the roof maintenance and repair services every Minnesotan homeowner needs to protect their property all year round!